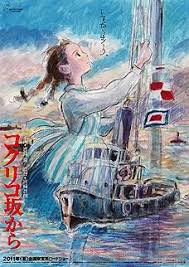 Before Kokurikozaka Kara the theme song made at the meeting, Hayao Miyazakisaid the March 11 earthquake occurred in eastern Japan, “For many people who are in now can not be buried, lost part of the territory of the country make the animation this matter, I was deeply conscious. Although it is now in the exploration stage of development of civilization, but now is not the time emphasizing on the culture.”

After the “311 earthquake”, the Japanese planned outage so that the Kokurikozaka Kara production experienced a lot of trouble, often during the day and power outages, to the production staff to begin work at night, so in order to catch up with production schedules, they often work overtime at night.

Hayao Miyazaki said: “This is not the fantasy production of the period. So we are not suitable for making games. Now is the time to make living human”. The same as the planning is “to say that major events can stand the test of time, not to do it now. The demand for sea is essential for the future.” Miyazaki style incentives also issued that: “Japan is the state of grace by nature, even encountered such a thing, is a country with good benefits.” In addition, Ghibli has also revealed that donations for the earthquake affected areas, but did not disclose the specific amount of donation.